We consider the numerical approximation of the inverse problem for the linear advection-diffusion equation,

with $d$ being the diffusivity of the material and $v$ the direction of the advection.

Given a final time $T>0$ and a target function $u^\ast$ the aim is to identify the initial condition $u_0$ such that the solution, at time $t=T$, reaches the target $u^*$ or gets as close as possible to it. We assume that the initial condition $u_0$ is characterized as a combined set of sparse sources. This means that $u_0$ is a linear combination of unitary deltas with certain and possibly different weights, i.e:

We formulate the inverse problem using optimal control techniques. In particular, we consider the minimization of the following functional:

Letting $\textbf{u} : [0, T] \rightarrow \mathbb{R}^s$ where $s$ is the number of grid points on $\Omega$, we can write a general finite element (FE) discretization of the diffusion–advection equation in \eqref{modeleq} in a compact form as:

In order to get a time discretized version of the previous equation, we apply implicit Euler method with stepsize $\Delta t := T/N$ where $N$ is the total number of time steps. The numerical approximations to the solution are given by the vectors $\textbf{u}^n \approx \textbf{u}(t_n) \in \mathbb{R}^s$ with respect to the index $n=i\Delta t$ for $i=1,2,..,N$. Therefore, the fully discrete version of model equation is as follows,

We have considered here a two-dimensional example with several sources to be identified in a multi-model environment. This means that the left half ($\Omega_1 = [0,1] \times [0,1]$) and the right half ($\Omega_2 = [1,2] \times [0,1]$) of the domain are modelled with different equations. In particular, the heat equation is used on $\Omega_1$ and the diffusion–advection equation is used on $\Omega_2$.

The initialization parameters look as follows:

We now compute the FE discretization matrices $M$, $A$ and $V$ that are respectively the mass matrix, the stiffness matrix and the advection matrix. For the FE discretization we assume equidistant structured meshes. In particular we use triangular elements and the classical pyramidal test functions are employed.

A reference initial condition is chosen and we compute using the FE discretization specified above and implicit Euler in time its corresponding final state at time $T$. This final state will be considered the initial data of the inverse problem to be solved and we name it the target function $u^*$ as mentioned previously.

We now call the algorithm that estimates the initial condition $u_0$ using as a initial data the target function $u^*$. As mentioned before, this algorithm consists of two steps.

Firstly, the classical adjoint methodology that minimizes the functional $J(u_0)$ subject to the diffusion-advection equation is used. The iterative optimization algorithm employed is the classical gradient descent method. However, although this iterative procedure finds quite accurately the locations of the sources, it does not recover the sparse character of the initial condition. This is not suprising because the recovered initial data comes from solving the adjoint problem which is basically a diffusive process that smoothes out its state. Consequently, a second procedure is needed to project the obtained non sparse initial condition into the set of admissible sparse solutions.

As the initial condition $u_0$ is assumed to be a linear combination between the locations and the intensities, once we have fixed the locations using the adjoint methodology we can solve a least squares problem to get the remaining intensities. We assemble a matrix $\textbf{L} \in \mathbb{R}^{s \times l}$ where at each column we have the forward solution for a single unitary delta placed at each of the locations already identified. We then solve the following linear system of equations for the vector of unknowns $\alpha = (\alpha_1, \alpha_2, …, \alpha_l)^T$:

to find the intensities vector $\alpha$.

Finally, the final state at $T$ is computed using as a initial condition the estimated sparse sources identified with our algorithm.

We can see the evolution recovered 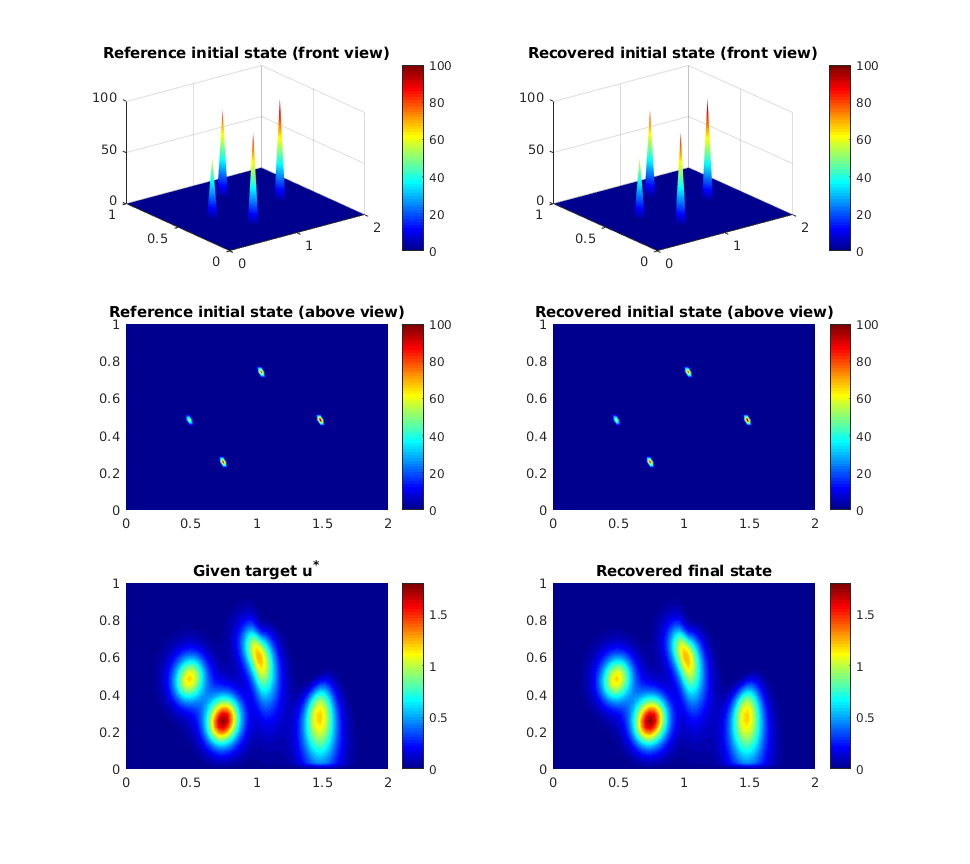