Solving the driving problem with a repulsion force 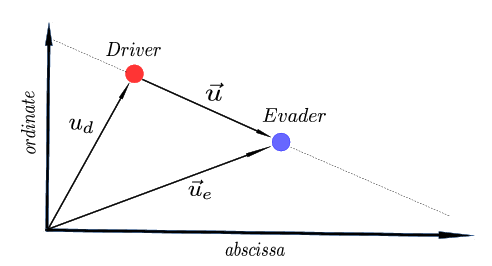 Figure1: The model describes the interaction between two agent: a driver (in red) and an evader (in blue).

The standard approach for solving a driving problem is a leadership strategy, based on the attraction that a driver agent exerts on other agents, [1],[2],[3]. Repulsion forces are mostly used for collision avoidance, defending a target or describing the need for personal space [3], [4]. We present a “guidance by repulsion” model [5] describing the behaviour of two agents, a driver and an evader. The driver follows the guided but cannot be arbitrarily close to it, while the evader tries to move away from the driver beyond a short distance. The key ingredient of the model is that the driver can display a circumvention motion around the evader, in such a way that the trajectory of the evader is modified due to the repulsion that the driver exerts on the evader. We propose different open loop strategies for driving the evader from any given point to another assuming that both switching the control and keeping the circumvention mode active have a cost. However, numerical simulations show that the system is highly sensitive to small variations in the activation of the circumvention motion, so a general open-loop control would not be of practical interest. We then propose a feedback control law that avoids an excessive use of the circumvention mode, finding numerically that the feedback law significantly reduces the cost obtained with the open-loop control.

The "Guidance by Repulsion" model 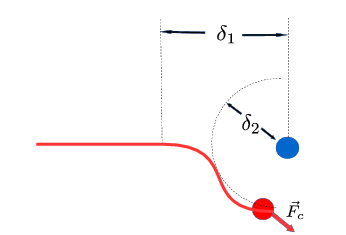 The optimal control problem and the feedback law

and we formulate the optimal control problem:

For systems that are subject to conditions of high sensitivity, closed-loop or feedback controls offer the possibility of correcting the state of the system for deviations from the desired behaviour instantaneously. The feedback control law is based on: 1- the alignment of the driver and the evader with the target point $T$ is easier to observe the orientation of the vector $\vec{v}_e(t)$ 2- when the driver is sufficiently far from the evader, $\kappa(t)$ can be set to zero. We define the alignment of the agents and the characteristic function:

The feedback control law can then be written as follows:

[1] Alfio Borzì and Suttida Wongkaew. Modeling and control through leadership of a refined flocking system. Mathematical Models and Methods in Applied Sciences,25(02):255–282, 2015.

In this DyCon Toolbox tutorial, we present how to use OptimaControl enviroment to control a consensus that models the complex emergent dynamics over a given network.
Author: Dongnam Ko - 01 April 2020 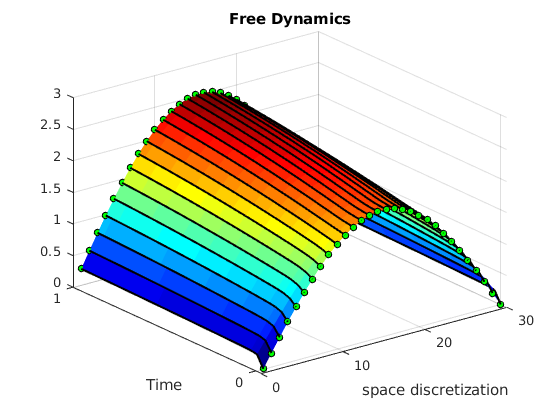 In this tutorial we will apply the DyCon toolbox to find a control to the semi-discrete semi-linear heat equation.
Author: Domenec Ruiz - 15 March 2020 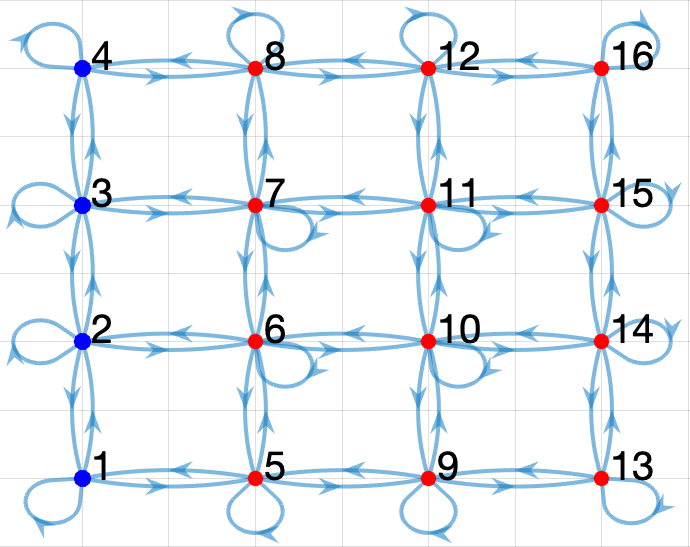 In this post, we use IpOpt and AMPL to simulate optimal controls on a nonlinear ODE system with unbounded interactions. The restriction and initial guess on the state variables are critical for this problem to operate minimization algorithm. From the data calculated from AMPL, we interpret and visualize it using Matlab.
Author: Dongnam Ko - 27 May 2019